In April 2019 we organised a blind tasting of red Languedoc-Roussillon wines with a minimum price point of €50, in which our flagship cuvée La Madone 2016 came 2nd out of the 22 wines tasted.

On February 3rd 2020 we raised the bar by taking the highest scoring wines from Languedoc- Roussillon and the southern Rhône valley, as listed by the French wine guides Bettane & Desseauve and La RVF 2020.

12 wine writers and journalists came to kindly take part in this event, including representatives from Bettane & Dessauve, la RVF, l’Obs, le Parisien, Terre de Vins, Wine Business International, World of Fine Wine, Wine Spectator and Decanter.
The tasting was conducted under the watchful eye of a bailiff, and the order of the wines tasted (12 from Languedoc-Roussillon, 12 from the southern Rhône valley) was drawn out of a hat. Two and a half hours later, the identity of the wines was revealed and the the final ranking can be seen here.
https://bit.ly/2H0oSDO

For Calmel & Joseph, having La Madone 2017 tasted and rated alongside some of the greatest wines of the south of France was an invaluable experience. Naturally we would have preferred not have come 21st (finishing 2nd in 2019 was more flattering) but we have lessons to learn from this tasting and there are several positive aspects to it. Looking at the final results, the top 10 features no less than four Languedoc-Roussillon wines (with comparatively modest prices), demonstrating the increasing quality of wines from our region. Other wines – including our Madone 2017 – have some way to go if they want to figure higher up the list.

On a positive note, the judges were unanimously positive about the overall quality of the wines tasted, and the scores were highly consistent and very encouraging for the region. Our score of 90/100 for what is only our second vintage of La Madone encourages us to keep striving.
We warmly thank all the tasters who kindly gave up their time to take part in this exercise, as it takes a certain courage to step into the blind tasting arena.

We look forward to seeing you again next year for another exciting wine adventure!
The Calmel & Joseph team 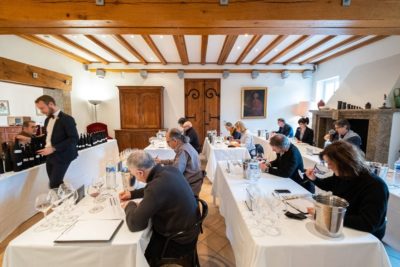 Back to news | Update