Range The Domaine
See all wines

Garnet red in colour. The nose is extremely refined with good vivacity, opening with smoky notes evolving to black fruit, gingerbread and humus that weave together in an intricate complexity. Immense verticality and integrity in the mouth, with the same black fruit aromas evocative of blackcurrant and blackberry, followed by expressive notes of garrigue, cinnamon and pepper, all underpinned by an incredible freshness that is characteristic of the Domaine’s terroirs. The tannins are exceptionally fine-grained, but their presence and their persistence are astounding. A superbly balanced wine that promises remarkable ageing potential.

Parcels of sandy limestone clay soils facing South-east, South-west or north to obtain maximum balance. The Domaine is in its second year of conversion to organic agriculture. It is the most westerly in all the Corbières appellation, sitting at altitudes of between 240 and 300 metres.

Harvesting began on the 15 September with the Syrah, picked from selected vine bushes at optimum maturity after berry tasting at the parcel. The Grenache was picked on the 19 September following the same principles.
In 2016 maturities were perfectly homogenous and healthy. All the grapes were picked and sorted by hand and placed in small crates before being transferred to the cellar where they were sorted again on a sorting table and destemmed just above the fermentation vat. The two grape varieties were fermented together. Maceration lasted four weeks at a temperature of 25°C, and the wine was then run off into barrels without any SO2. Malolactic fermentation took place the following spring (2017). A final racking was accompanied by a very light dose of sulphites.

The wine was matured for 15 months in two-year-old barrels, up until January 2018. Unfined. 2g/hl sulphites 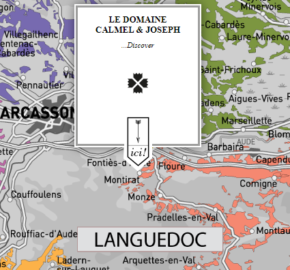