Minervois is an AOP wine produced in the foothills of the Montagne Noire, straddling the departments of Hérault and Aude. Recognized as AOC since 1985, this appellation covers an area of over 4,000 hectares between Narbonne and Carcassonne, the Montagne Noire and the Canal du Midi. Near the Montagne Noire, the soil is mainly composed of pebbles, sandstone, shale and limestone. Further south, veins of shale and marble make up most of the soil.

The appellation produces predominantly red wines from the following main grape varieties: Grenache, Syrah, Mourvèdre and Carignan. The Mediterranean climate is characterized as being very windy (over 300 days per year). It dries the vines after the scarce rainfall and keeps the vineyards healthy and pest free. 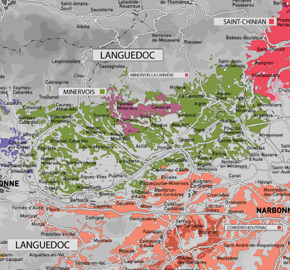