Formerly called Vins de Pays d’Oc, IGP wines are produced throughout the Languedoc vineyards as well as in the Roussillon. It covers four departments: Gard, Hérault, Aude and Pyrenees Orientales. This wine region has been in existence for over 2,600 years. The vine was introduced by the Greeks, after they established their first trading post in Agde. A few centuries later, under the Emperor Augustus, it was the Narbonne region which saw significant growth in viticulture, followed by the plain extending from Narbonne to Beziers. Closer to home, the wine region reached a peak of 430,000 hectares of vines under production in the 70’s, representing nearly 45% of the total production in France. But consumer behavior changed and the region suffered badly which lead it to restructure and rethink its objectives. Quality wines had to be produced and the region then submitted an application for the Vin de Pays d’Oc label which it finally obtained in 1987. On 1 August 2009, the status changed to IGP(PGI) Pays d’Oc which ensures that the wines are produced using traditional knowhow closely tied to their region, are of consistent quality and a typical aromatic profile, strictly controlled and “Bureau Veritas Quality France.” certified.

Today, there are no more than 40,000 hectares of vines covering our beautiful region. 56 different grape varieties thrive in the area, the best known being: 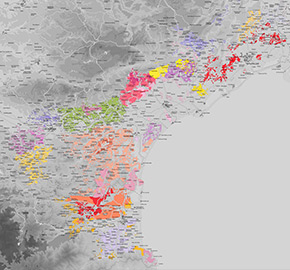