On the edge of the Mediterranean, alongside the Etang de Thau (Thau lake), the wine area known as the “Marine” covers a surface area of 1,400 Hectares. Next to the ancient Roman ports of Sète and Agde, the Languedoc – Picpoul de Pinet AOP is one of the oldest vineyard areas and the largest white wine region in the Languedoc.

The famous Roman road “Via Domitia” cuts the area into two large terroirs: an area alternating garrigue scrubland and pine forest with little maritime influence, which is therefore both hot and wet. South there is a more homogeneous area opening out to the sea, covered entirely in vineyards, its climate tempered by sea breezes and mists. The marine influence is important because it controls daily temperature fluctuations and keeps the nights cool even when daytime temperatures are high.

The late ripening “Piquepoul” grape variety has existed in this region since time immemorial. Mostly white, there are also gray and black versions. 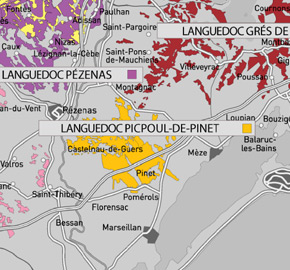