Saint Chinian is an AOP wine produced in the area around Saint Chinian in the Herault. From a VDQS wine in 1951, it acquired the AOC designation in 1982 for its red and rosé wines and in 2004 for its white.

It sits at the foot of the southern slopes of the Massif Central (Massif de l’Espinouse) and covers 3,300 hectares declared as AOP and spread over 20 villages. It is exposed towards the Mediterranean, bordered to the north by scrubland, then extends south to the Béziers wine plain. The soil is divided into two distinct parts: in the north, it is composed of shale as in Faugères to which it is attached. In the south, the vineyards lie on a clayey limestone which produces less full-bodied wines. The climate is typically Mediterranean with mild winters, hot, dry summers and little rainfall. 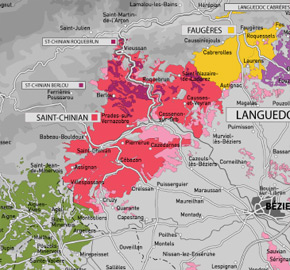